I feel like I’m in a Macy’s Christmas window!

The holidays are upon us and the windows at Carolyn Seiler and Friends in Cocoa Village are all decked out with my Imagining Imogene front and center! 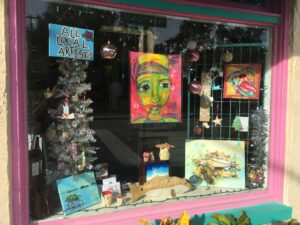 And if you’re into crazy birds and animals on your tree, I can accommodate that too! 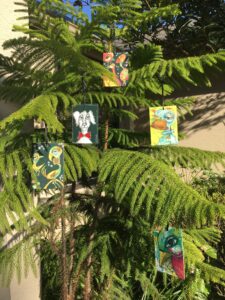 This year continues to amaze and humble me.

Happy Holidays to you and yours!

I won’t say “Where does the time go?”, but I sure would like to!

It’s been busy in the Sim-Studio. In November, I had an amazing exhibition at OhVino’s, a local wine and sake bar. It began as a crazy idea that turned into a GREAT idea, if I do say so myself.

In my little town, we live and die by the Space Center. Don’t get me wrong, but I often refer to Titusville as ‘that smudge on the road between the Cocoa and Daytona beaches. We’re the girl who was invited to the prom, but couldn’t afford the dress. Our downtown area consists of about two blocks of mostly boarded up historical buildings, an art gallery (YAY!), a brewery which I love, more coffee shops (two) than our town can support so one closed, an amazing playhouse and OhVino’s. Oh yeah. There’s an ice cream shop, but no one can figure out what their hours are. If any of you are fans of Night Vale, we also have the Faceless Woman and lights over Arby’s.

I really do love where I live and support many of our small town businesses, often to the potential detriment to my liver, so when OhVino’s opened, I wanted everyone to know about it. It’s a cool kind of hipster bar (is that still a thing?) run by to wonderful people where jazz is always playing and there are not TVs so the patrons actually talk to each other. One of the owners is also an artist.

“So!” said I, “How about I have an exhibition here and we’ll invite a bunch of people who probably don’t know about you and you’ll sell wine and I’ll sell art?”

Yeah. I woke up the next morning thinking what a fucking stupid idea that was. And then this happened: 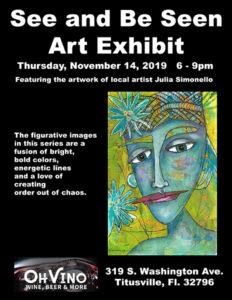 It was an amazing night! So many people showed up and both wine and art were sold in abundance. Okay – more wine than art, but it was still a great night! 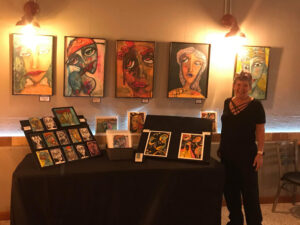 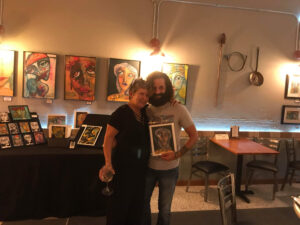 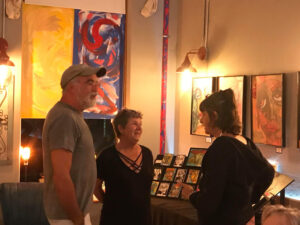 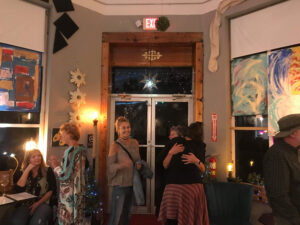 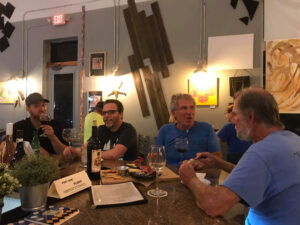 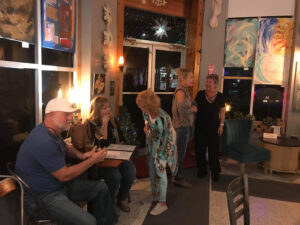 So the moral to this story is this: If you have a crazy idea, just do it. You never know what may come of it.